It’s fair to say 2016 has been a pretty dramatic year.

Not least here at Box of Tricks HQ. During this, our tenth anniversary season, we’ve celebrated with a birthday party, served up theatre with a side of fish and chips, produced our first full-length run in London for seven years and welcomed new faces to the company.

In February and March, we toured Becky Prestwich’s Chip Shop Chips (“An all-round feel-good immersive production” ★★★★ Reviews Hub) to non-theatre spaces as part of a completely sold out tour. Serving up over 2000 chippy teas over five weeks, Chip Shop Chips spread love, Northern Soul and top notch theatre to communities across the North.

In June, we celebrated in style with our 10th Birthday Party at the Eagle Inn in Salford. Championing playwrights past, present and future, there were specially-commissioned new plays inspired by Manchester, Picture a City, and excerpts from plays from our back catalogue, Dramatic Decade, all served up with delicious Gujarati street food from Samosa Shack. We welcomed lighting wizard Richard Owen and musical magician Chris Hope to the company as Associate Artists.

In September and October, we teamed up with the brilliant New Diorama Theatre to bring Plastic Figurines by Ella Carmen Greenhill to London for a four-week run. Nominated for two Off West End awards, we bowled over audiences and critics alike (“A mighty miniature” ★★★★ The Times) and delivered various Open Access performances. In October, Adam wrote an article for The Stage about why Moving to Manchester was the best decision we ever made.

2017 looks set to be even more exciting. The new year sees us head into rehearsals for Narvik (“Thrillingly theatrical” ★★★★ The Guardian), a new play with songs by Lizzie Nunnery, which opens at HOME in Manchester on 31 January. Following its sold-out run at the Playhouse Studio Liverpool in 2015, we’re heading on an eight-week national tour from January until March. Book your tickets now! Then in Spring/Summer, Chip Shop Chips is back by popular demand and heading out on a national tour.

Thanks so much for all your support in 2016 and for playing such a big part in making this such a special year. Here’s to 2017!

Merry Christmas one and all!

See you next year, 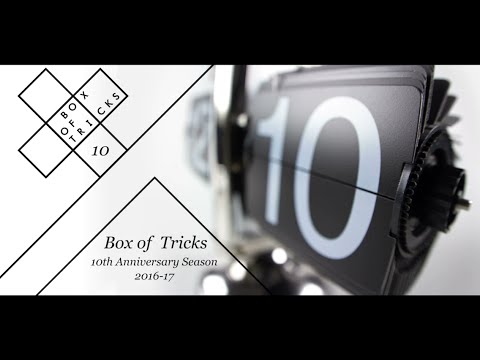